Egyptian jewelry has long been coveted not only because of its beauty but its mystery and lore.

The scarab is a popular design element. Representations of this beetle have been found in ceramic, stone sculpture and cut gems. It was used in ancient Egypt as a talisman and a symbol of the soul. The size lends well to jewelry design and its symbolic history of good luck and long life make it even more desirable 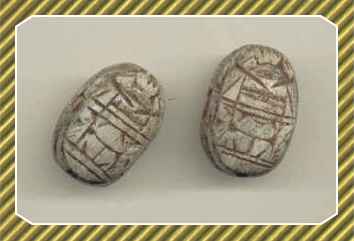 Egyptian jewelry is as old as its pyramids. The most common symbol is "Ankh"  Other symbols were also used such as the lotus flower, an eye, falcons, sphnix, and agricultural as well as mythological icons that described the life during that period.

Later there was a change jewelry design using gold to cater to the richer desires of pharaohs. The pieces included semi-precious materials and lavish designs. They so cherished their jewelry that favored pieces were buried with them so they could be enjoyed in the next life. Thick vest plates made of gold were worn and accompanied the "mummies" in their burial rites.

Select the above icon to browse our Egyptian Items For Sale